April Glarner grew up in Western New York with a hunger and talent for music.  Starting at a very young age, singing, writing songs, and playing instruments at church on Sunday’s and at School.  April is and has always been fueled by her desire to touch the hearts of those who listened.  She also was a part of Awareness Theatre for three years with late Director John Blackman as well as performed in one act plays and had small roles in High School Musicals.  Her love for music was her strongest passion and was her anchor as she moved on in life.

She served in the military for several years and during that time, she took a break from military duty and as a miltary spouse, became an FCC (Family Child Care) provider, certified to run her own day care program through the training provided by the United States Army in Hanau, Germany.  April has taken music courses at UTEP as a music major and at JCC.

All of our teachers have undergone background checks and have been child safe certified!

At The Warren Music Conservatory you will find a quality music education from our area’s finest professional teachers and musicians.  We are a kid friendly environment and have private or group lessons for all ages and skill levels.  Feel free to browse our website and don’t forget to share with friends, family and colleagues!  Please contact us for lesson times and questions.  Thank you for your interest in The Music Conservatory of Warren! 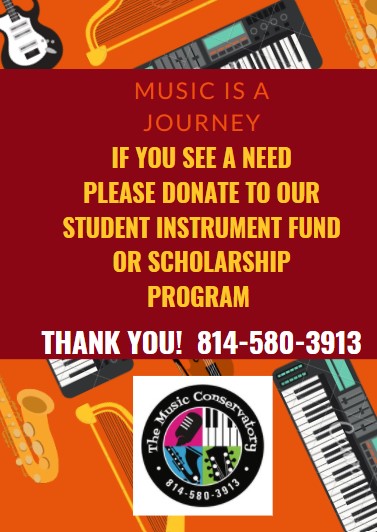 Warren Music Conservatory
220 Pennsylvania Ave West Warren PA 16365
814 580 3913
warrenmusicconservatory@gmail.com
Administration hours are Monday through Thursday 3-8pm, And Fridays 9am to 11 am. We are closed Saturdays and Sundays